Home/Uncategorized/Podium For Troy After Terrific EJC Race In Germany
­

Podium For Troy After Terrific EJC Race In Germany

Troy Bezuidenhout, the 16 year old South African who now lives in Spain, produced the ride of his young career to date in yesterday’s European Junior Cup (EJC) race at the Laustizring in Germany racing to a maiden podium (3rd position) after an impressive race from start to finish. 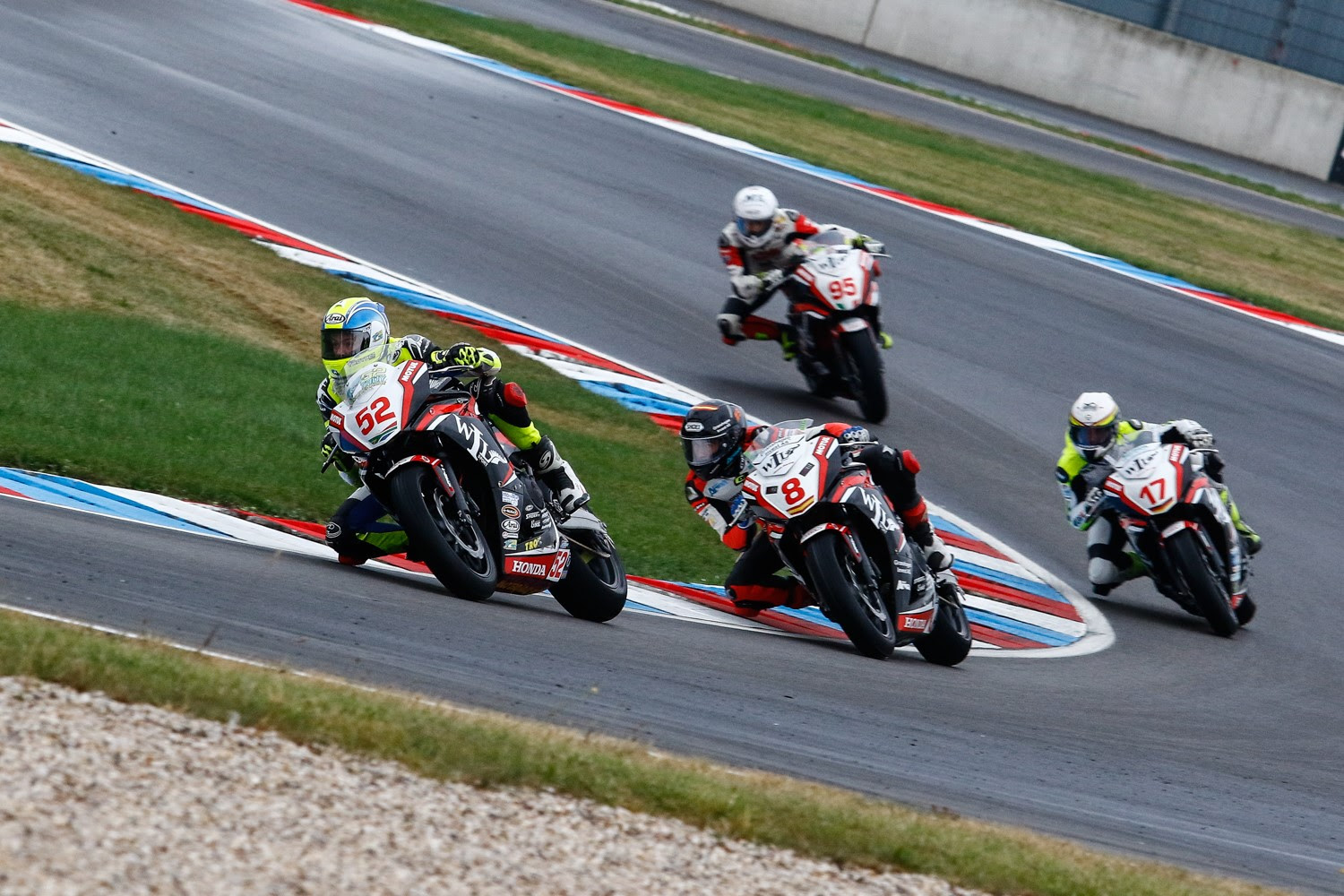 The lengthy summer break that is customary in the World Superbike championship was even longer for Bezuidenhout, the teenager having missed the Italian round at Misano because of injury.

Looking fitter and more confident the Into The Blue Diving Honda rider was on top form in every session despite being a rookie at the technical German track.

Qualifying 5th, which equalled his best performance of the year over a single timed lap, Troyston as he has been affectionately named by several media representatives within the paddock rode superbly on the drying track challenging for the lead early on after some impressive overtakes on his rivals.

Backing the bike in Moto2 style, Troy’s ability to race at the front throughout has made many sit up and take note including World Superbike riders Karel Abraham and Josh Brookes who were watching with Troy’s parents in the pit lane at various points of the weekend.

Troy’s celebration as he crossed the line coupled with his dad Charles hanging off the pit wall and his mum Dion crying in parc ferme had several journalists and photographers in tears – a true family achievement. The result itself and precisely what he has achieved will probably not sink in properly for a few days, giving Troy a week to regroup and focus on the next round of the championship in France next week. 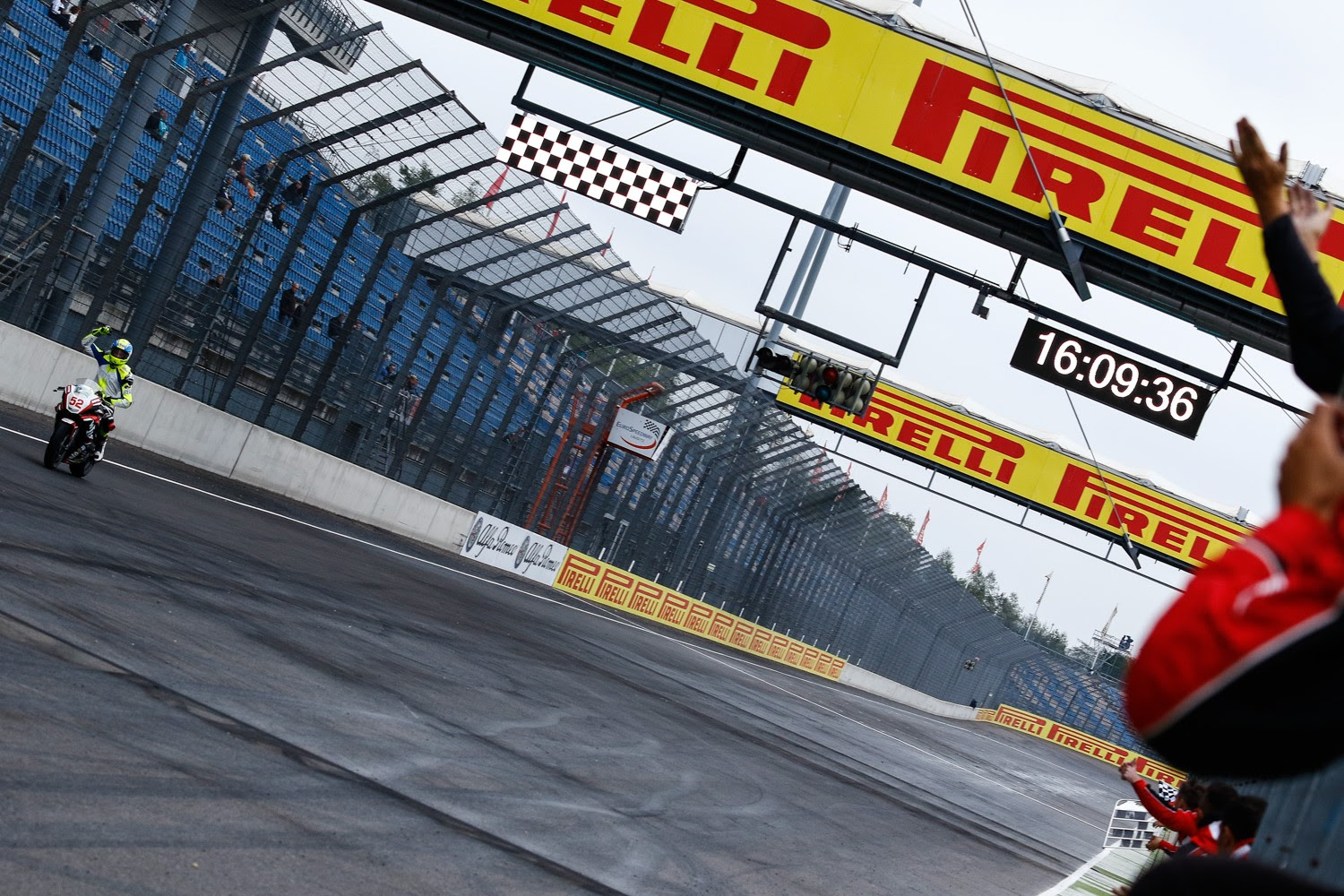 Troy Bezuidenhout – 3rd position: “Where do I start? For once I have no words. From Friday when even though we were fast we didn’t have the perfect set up to how I feel right now is pretty crazy. My dad and I worked hard and I have to say that he is the best. My nerves before the race were so bad. It was raining during the superbike race and then started to dry but it wasn’t wet enough to start on dry tyres. From the start I tried to settle down and adjusted my style to suit the track. The chat with Gary Walton from NotSoFast rider coaching helped massively so thanks Gary. I had a great battle with Mika and it was I can say the best race of my life. I made some good passes and I had a big grin when I went up to second place at turn one after a few laps. In the end I got third and my first ever podium which feels brilliant, especially after I couldn’t race in Italy. I did myself proud and more importantly did my family proud. It was funny to them crying when I came into parc ferme but it was a family effort so it’s their podium too. Thank you to everyone who is supporting me and who is sticking with me, especially Into The Blue Diving Costa Del Sol, HELD, Arai, 6T9, SL Graphics. To Michael who believed in me from the very beginning when he didn’t really know me. I still can’t believe it but I have to stay calm because we go to France next week and I definitely want to go through the whole podium ceremony experience again but maybe next time the South African flag can be one or two place higher.”