There were mixed fortunes for the Bournemouth-based JG Speedfit Kawasaki team this weekend as they resumed their challenge for the 2017 MCE British Superbike Championship at their local Thruxton circuit.

It proved to be a challenging meeting with Luke Mossey ruled out due to injury following a heavy crash in Saturday morning’s third free practice session. However, teammate Leon Haslam fared better grabbing a vital podium credit with an excellent third place in the second race after taking a solid seventh in the first. 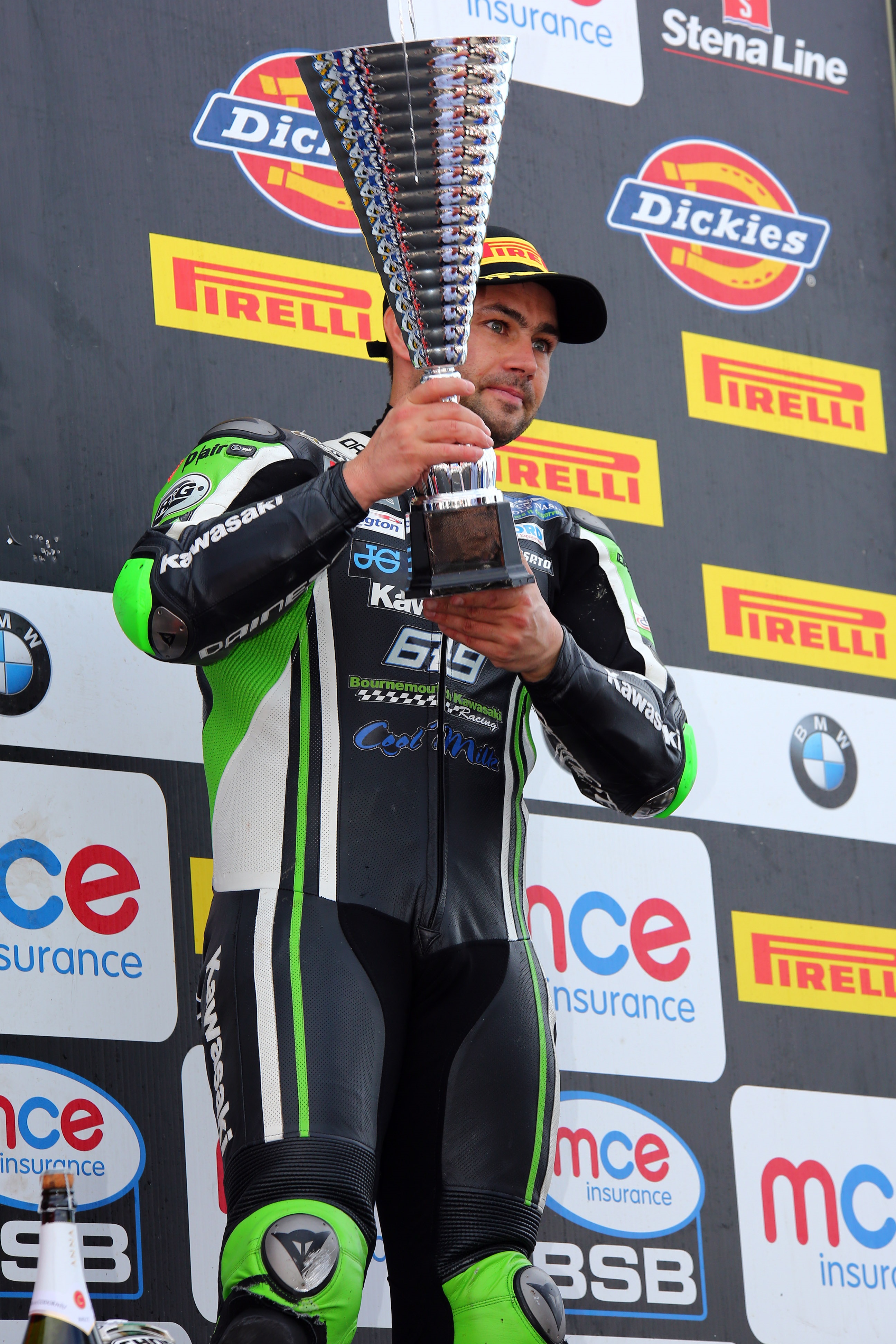 Mossey had just set the second fastest time in the final free practice session when he crashed just past the start and finish and, after being taken to the local hospital for further treatment, he was ruled out of the rest of the meeting with a broken vertebrae and bruised ankle.

Despite this, after the results of the weekend, the Cambridgeshire rider remains in one of the top six Showdown positions and the team will continue to assess his situation before a decision is made regarding his participation at the next round at Cadwell Park in two weeks’ time.

Mossey’s departure left 33-year-old Haslam flying the team flag but he too had a testing weekend. Having set the third fastest time in Q2 on Saturday afternoon, he crashed coming out of the chicane on his final, single lap Superpole attempt and it meant he had to start the opening 18-lap race from ninth on the grid and on the third row. It proved to be a stop-start affair as a safety car period of six laps ultimately meant the race became a ten-lap sprint. 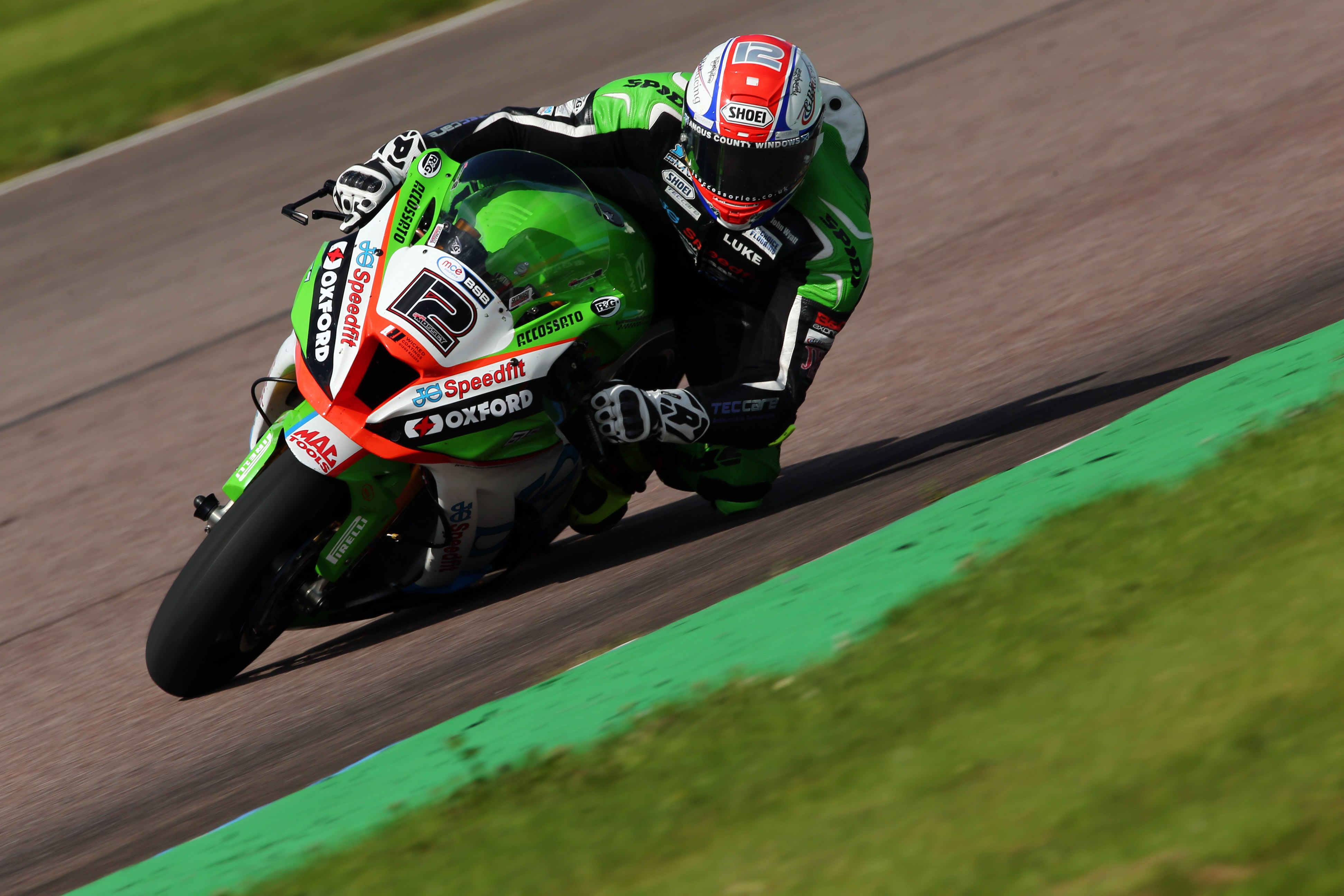 Leon was involved in a battle for fifth with Christian Iddon and Jason O’Halloran but didn’t quite have the grip needed to challenge and he had to settle for nine points at the chequered flag. The Derbyshire rider was able to start the second race from the second row and changes to the bike meant grip levels were better. Indeed, he fought all the way until the end and grabbed third at the chicane on the final lap to claim what could prove to be a crucial podium credit.

It was a busy weekend for the Hyundai Heavy Industries British Sidecar Championship competitors too with three races on the schedule but it was ultimately a successful one for JG Speedfit Kawasaki with no less than three podiums taken between Ricky Stevens/Ryan Charlwood and the all-female duo of Maria Costello/Kirsty Hauxwell.

Reigning champions Stevens/Charlwood were unable to get the better of the flying Tim and Tristan Reeves but, having opened their account with sixth in a damp race one, a fine second in race two was a truer reflection of their pace. 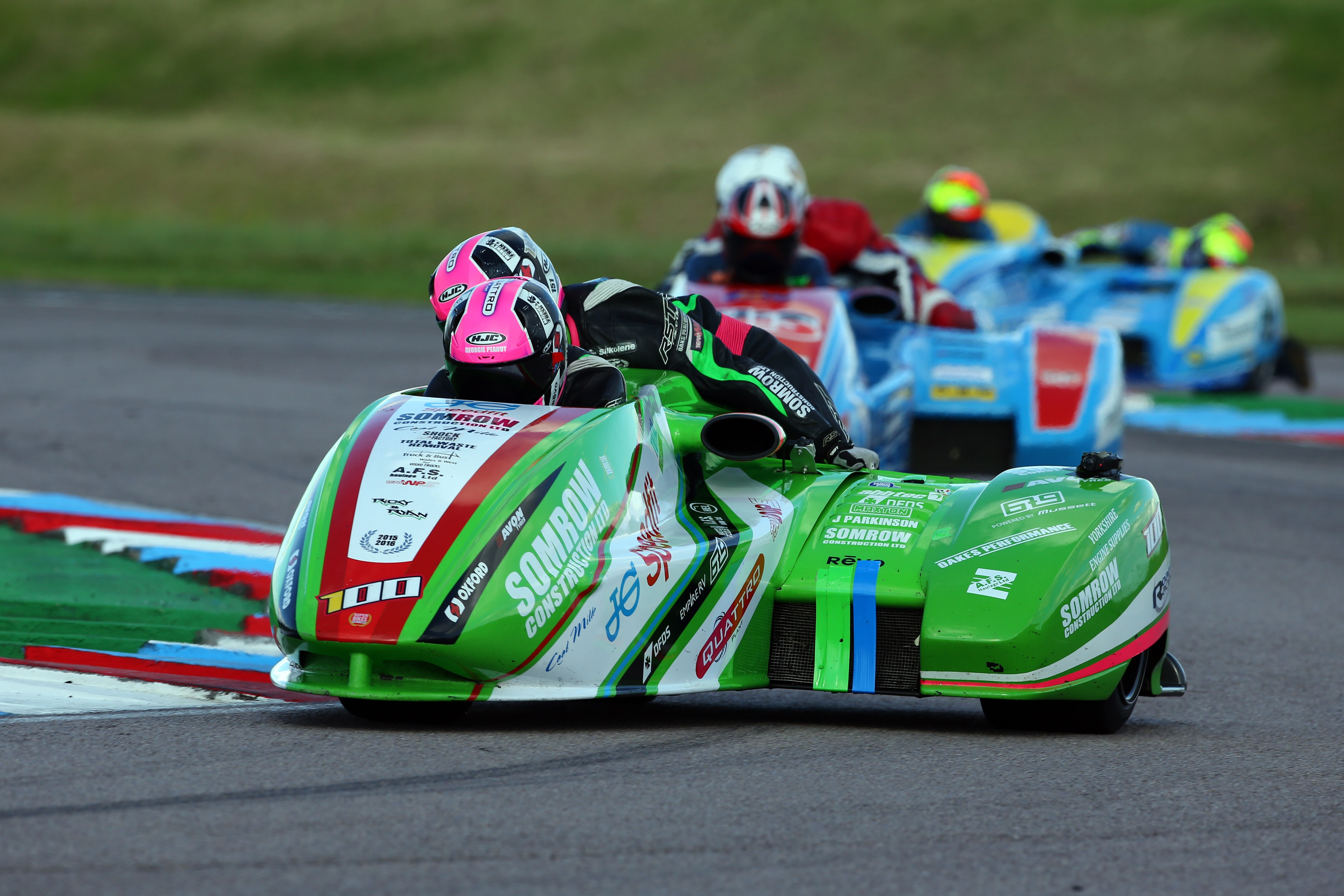 Meanwhile, Costello and Hauxwell finished both races on their 600cc outfit and were on the podium in each, taking a brace of third place finishes. Unfortunately, two accidents in Sunday’s race ultimately meant it was cancelled.

Haslam said: “I’m really happy with the overall end result here at Thruxton.  We knew it was going to be a tough weekend as it was one of my worst weekends last year on the Kawasaki.

“Race one was reduced to only ten laps and the hard compound tyre just wouldn’t work for us on that distance versus the other riders on the softer tyre.

“Similarly race two got reduced to 18 laps but we managed to fight through for a podium place. I managed to gain podium credits and points at my worst circuit of the calendar and I must say a huge thanks to all my team at JG Speedfit for working so hard all weekend.

“I am now looking forward to the remaining rounds which are at circuits where we’ve previously performed well. We had a good test at Cadwell and I have a week to rest after what has been a tough few months!” 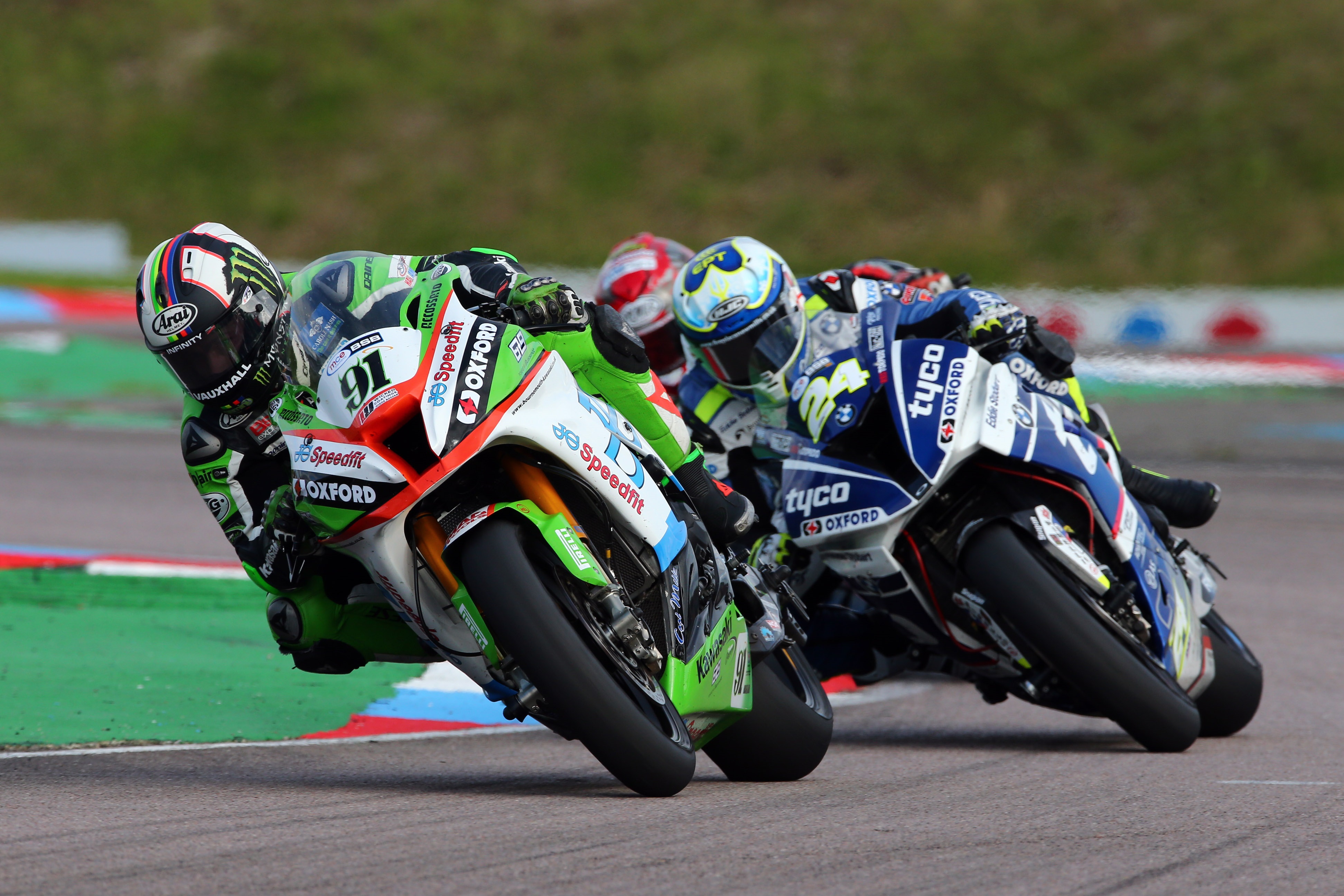 Mossey said: “Well this is certainly not how I planned to spend my weekend at Thruxton – laid in a hospital bed with a broken vertebra! The boys had worked really hard after Snetterton and Brands and the bike felt fantastic on Friday. Thruxton has always been one of my favourite circuits and I’ve been really fortunate in the past to have some really good results here.

“I was going well in FP3 and was comfortably sitting in second. I was on another strong lap but as I came out of the final complex my rear wheel went on the grass and the rest is history. It threw me so high and so far that I didn’t know when I was going to land! I knew something wasn’t right instantly but the track medics and staff were with me in seconds. I can’t thank them enough for their prompt assistance.

“I am just so sorry for all of the JG Speedfit team who work so hard and I am disappointed to let them down especially when things were heading in the right direction again. Thank you to every single person who has messaged, tweeted or got in contact with me to wish me well. I’m very grateful for all the support I have been shown, it means a lot and I hope to see you all again soon!”

Charlwood said: “Qualifying was a bit of a disaster because of our choice of tyres but race one was actually quite good for us in terms of confidence building. We started in p15 and ended up in sixth place in the wet so we were both quite pleased with that.

“Thankfully race two was dry but we had a bit of a bad start because of the bike. Once we got going, however, we manged to move into second place on lap three which is where we finished.

“We were equalling the lap leader’s times in race two so we were really pumped for the third race and we were going for a win but unfortunately it was cancelled following two crashes early on. We’re now looking forward to Cadwell in two weeks’ time and making sure the bike is ready for what is set to be another full-on weekend of racing.”

Costello said: “We really enjoyed racing at Thruxton as it’s a really fast circuit and to get not one, but two podium finishes this weekend was an amazing feeling.

“Qualifying was tough as it had rained hard just before we went out so the track was really wet and we made some mistakes with tyre choices but coming third in our class in both races on Saturdaygave us a massive confidence boost. We’re pleased all of our hard work is starting to pay off and we’d like to say a massive thank you to our team, our amazing sponsors and of course our fans for all their support”

Team Manager Jack Valentine added: “Well the weekend ended better than it started! It was really disappointing to have Luke crash out and injure himself; he was riding extremely well and looking set for another set of strong results.

“Leon has always struggled in the past at Thruxton and this weekend he has managed to come away with a podium and set the second fastest lap time of the race. It is a huge confidence boost for him and we also gained some vital podium credits. We have made some strong progress this weekend and we’re looking forward to round eight at Cadwell. I want to wish Luke a very speedy recovery and we hope to have him back in the garage with us soon.”

The meeting was overshadowed by an accident in Sunday’s Pirelli National Superstock 1000 Championship which sadly claimed the life of Mark Fincham. Everyone from the JG Speedfit Kawasaki team would like to pass on their condolences to all of Mark’s family and friends.

The next round of both championships takes place at Cadwell Park in Lincolnshire from 18th to 20th August.