After over two months orchestrating, promoting and organising logistics alongside BeMoto, the day was finally here, Team 6t9 were heading to iconic classic car event Silverstone Classic. Silverstone Classic was founded in 1990 and is a three-day annual car and race event at the UK’s popular Silverstone Circuit, home to the British Grand Prix. ‘The World’s Biggest Classic Motor Racing Festival’ celebrated its 25th anniversary in 2015 and 2016 saw World GP Bike Legends join the event for the very first time.

Team 6t9 and BeMoto had joined forces to run a competition with the awesome prize for one lucky racing fan to win a years supply of 6t9 products, a signed Freddie Spencer Arai helmet and a day at Silverstone Classic to meet the legend of motorcycle racing that is ‘Fast Freddie’ Spencer. Freddie Spencer dominated the early 1980’s as a young motorcycle racer, going on to win both 250cc and 500cc Grand Prix World Championships in 1985. This historic year in motorcycle racing cemented Freddie as a world recognised legend of the sport. 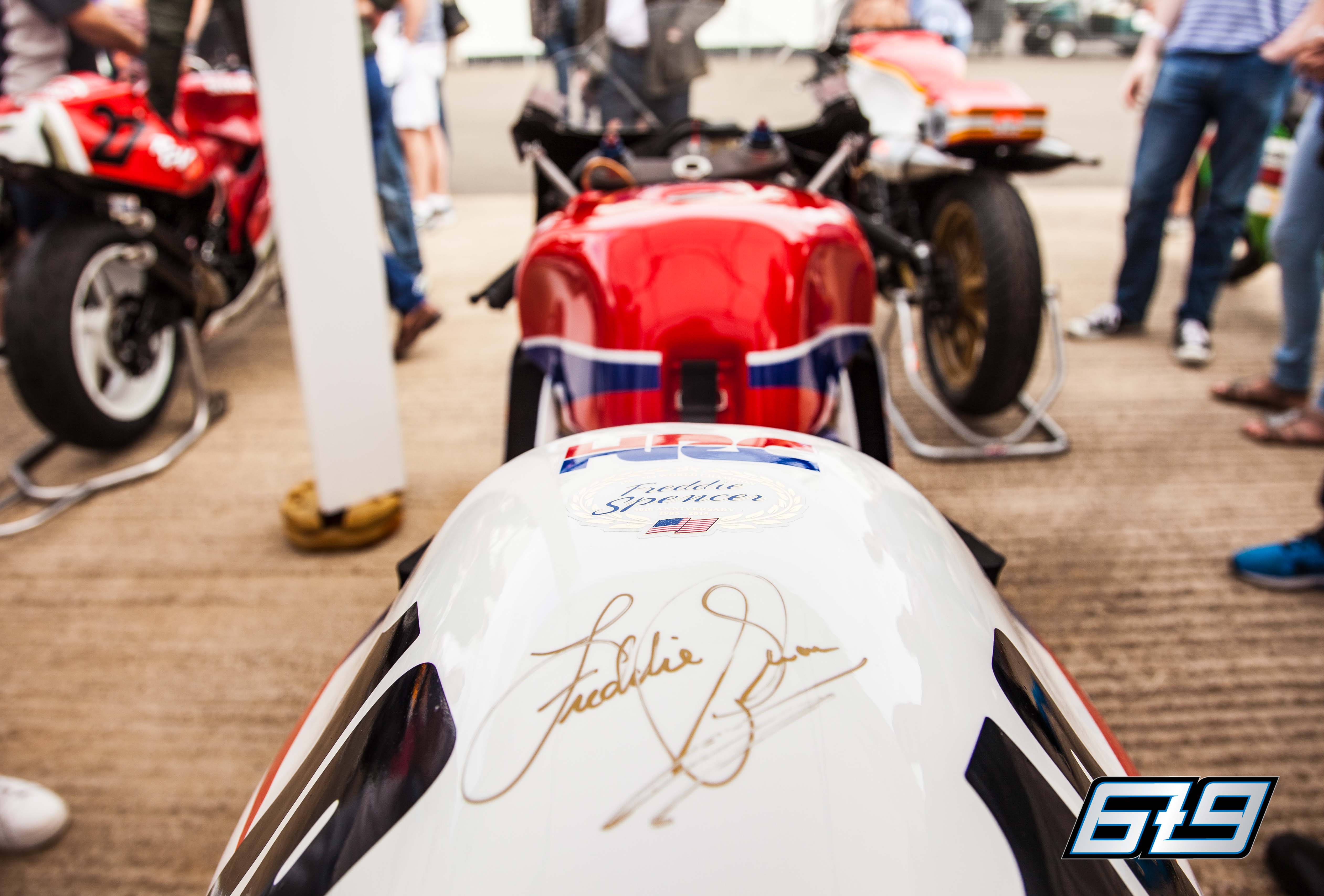 Within an event jam packed with all the beautiful cars you could imagine, there was an awning dedicated to World GP Bike Legends. A row of impressive superbikes accompanied by even more impressive bike legends; Troy Corser, Simon Crafar and Christian Sarron amongst others and of course Team 6t9 company ambassador Freddie Spencer. Fans of all ages gathered eagerly to get photos and autographs from their favourite World Champion. Grown men with childish grins waiting patiently to exchange words with their childhood heroes. There was one fan in particular that we were very eager to meet though and that was Russ Gardner. 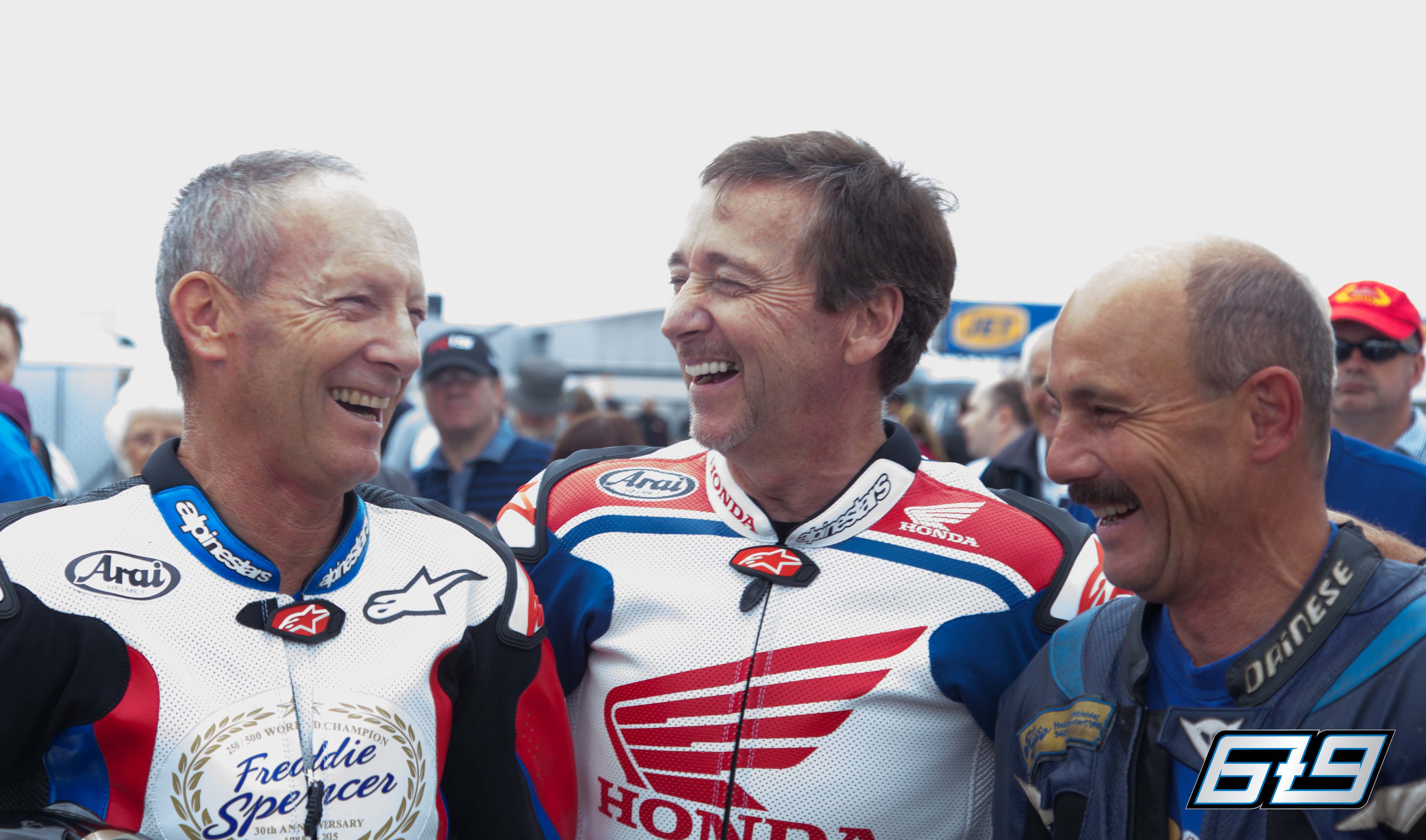 When starting the competition, Team 6t9 and BeMoto could never have imagined (after 1000’s of entries) that someone so deserving could win this Legendary Day. Russ, I think it is fair to say, has had one of the most difficult years of his life. After feeling unwell while enjoying a BSB event in Oulton Park last May, he was given the life changing news that he had cancer, for which he started treatment straight away. Unfortunately, the treatment didn’t go as well as hoped and Russ went on to chemotherapy in April. Dawn Cocker, a best friend of Russ’ partner Sharon, entered the competition in the hope that she would win a really special day for Russ who is an avid biking fan, bike instructor and massive Freddie Spencer fan. A few weeks ago Russ received some incredible news, his tumours had shrunk. Shortly after Dawn received the news that she had won the Legendary Day, a fantastic gift to celebrate the improvement in Russ’ health. Team 6t9 HQ was filled with emotion after hearing the moving story of Russ and the fact that he was such a big fan of Freddie Spencer.

The day was an absolute dream, after a couple of minor transport hitches, it was a beautiful day and everyone was in high spirits. Russ arrived at the awning very punctual and had initial photographs taken with Freddie, whilst he signed the Arai helmet. After enjoying some of what the event had to offer, including watching the procession of World GP Bike Legends behind the pace car on the Silverstone track, Russ returned to meet the rest of the Team 6t9 gang (including the years supply of Team 6t9 Superheroes he won as part of his prize). He kindly agreed to be featured in some film footage with Freddie to talk about how he felt about winning and how he had enjoyed the day. The conversation between the two was very natural and amazing to capture, especially considering Russ was meeting a childhood hero. 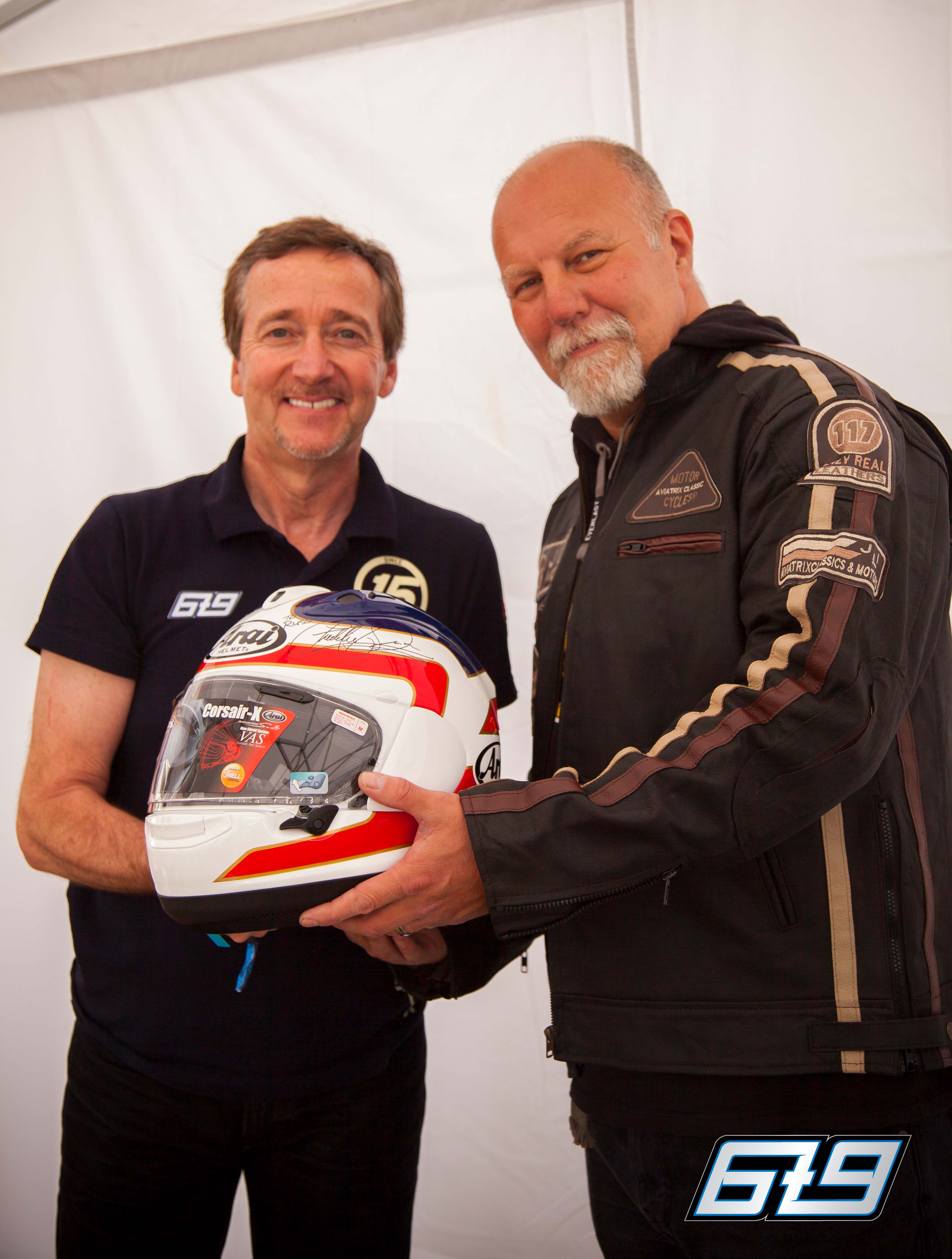 The day was really a dream come true for Russ and here’s what he had to say about his Legendary experience:

“It had been a rough year, being diagnosed with cancer in May 2015. So to win this prize really lifted my spirits and to be told by my consultant earlier in June that the cancer was under control meant that my day at Silverstone turned into a double celebration. The day was fantastic. Everyone really looked after myself and my wife Sharon and we met some great people. Meeting Freddie was an amazing experience as I’d watched him race in my younger days and have a huge respect for him. He was a lovely guy and made me feel at ease immediately. To win the prizes as well was a bonus. I have tried out most of the cleaning products from 6t9 and I am very impressed and will definitely be recommending them to all my friends and trainees. As for the helmet signed by Freddie it has got pride of place on display. All-in-all I had a fantastic day and once again would like to thank everyone I met and everyone involved in making the day possible. “

Team 6t9 and BeMoto are so incredibly happy that such a big fan of Freddie Spencer won this prize and that it was such a celebration in the wake of his recent news. 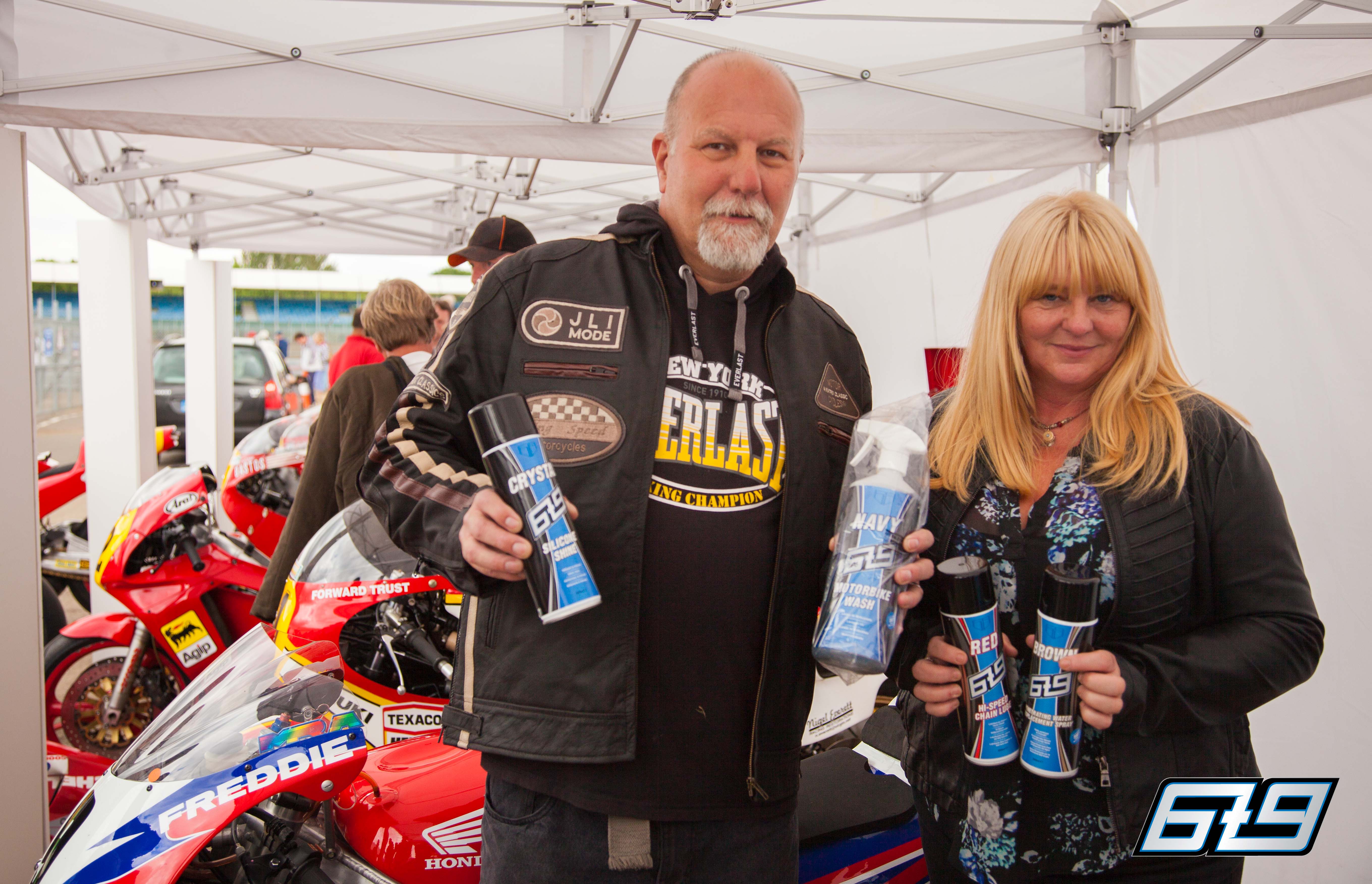 Check out our range of products for yourself here.

Team 6t9 would like to thank our partners BeMoto for all their incredible work during and after this competition.

Special thanks also to Goose Events, MPA Creative and Arai Helmets for making this competition and the day at Silverstone Classic truly special.

View our video from the day here.

The World GP Legends and Silverstone Classic event is right up our street. In addition to standard and modified road bikes, BeMoto loves classic and modern or future classic motorcycles. We have specialist schemes for these bikes and you will talk to a real biker when you call us.

We also have a range of products for classics and collections not used on the road, whether it’s a classic trackday (cover for damage on track) or fire & theft for SORN bikes in the garage – show bikes, laid-up bikes or non-road bikes!

Don’t forget to tell us if you are a member of a classic motorcycle club or racing club like the CMRC as we may be able to offer you a discount.

* Calls are recorded for our joint protection