The CAME BPT Yamaha had another mixed weekend at round six of the Dickies British Supersport Championship at the extremely fast Thruxton circuit. James Westmoreland gained a strong third place on Saturday and was fourth in race two on Sunday. His team-mate Joe Francis was unlucky to crash out of race one and finished eighth in race two. 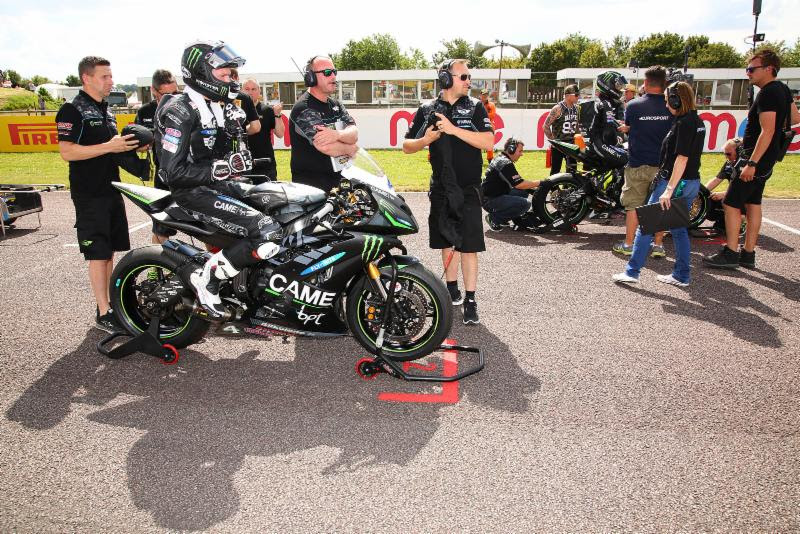 After a tricky weekend at Snetterton the other week, the CAME BPT riders were keen to make an impression at Thruxton this weekend. Both James Westmoreland and Joe Francis wanted to improve on their results and push hard for more Championship points.

During qualifying the pair were on fire and Westy secured pole position and Joe was 2nd 0.1 behind his team-mate. Both struggled off the start for the 12-lap race and Westy dropped back to fourth after lap one and Joe into fifth. As always Thruxton produces some brilliant racing and the pair were both in a battle for a podium position, Joe ran wide on lap two and he dropped back to seventh. He tried to re-compose himself but unfortunately clipped the engine casing on the curb on lap six and crashed out. Westy was locked in a battle with Brad Ray and Tarran Mackenzie for second place. He fought hard to fend off the attacks from Brad Ray and he was able to secure third place.

For race two Westy started from fifth and Joe from ninth. Westy struggled off the line and dropped back to eighth after lap one and once again was locked in a freight train battle at the start but soon the leading bunch made a break and he had to fight with the Yamaha and brought it home in fourth place. Joe dropped to tenth after lap one and he was at the back of the pack of riders but he was hindered with arm-pump trouble and had to nurse himself home in eighth place. Westy is now just one point off the lead in the Championship with 13 races to go.

James Westmoreland – “I was hoping this weekend would be better but to be fair it’s not been terrible and it was certainly better than Snetterton. I got a podium and fourth place and I am now only one point away from the Championship lead and there is a lot still to play for.
Practice went well and we thought we had done our homework on Friday on used tyres after a race distance but we couldn’t get anywhere near those times during the races. I didn’t have a good feeling in the races and I do feel a little disappointed as know we can do better.
We need to get our heads down for Brands and try and push things forward.”
Joe Francis – “It was a good weekend but the results just didn’t it show how strong we were. I was top two in every session and back to where we were at Brands Hatch. A crash in race one and arm pump in race two really hindered me from two potential podiums at Thruxton. We showed we have the pace to win and we just need to put all these things together now. I am only 18 and it is my first year in this class so it is a big learning curve for me so I know I can only get stronger.
I still think we haven’t shown our full potential yet but the team are doing an awesome job and they have worked so hard all weekend to give me a bike that could have won both races. I can’t wait to get back to Brands where I got my first big bike win and hopefully get back on the top step there.”
Grant Bunting – Team Manager – “It was another testing weekend, the boys were going so well during practice and qualifying and I thought we were all set for some strong podium finishes and certainly some wins.
Westy worked hard all weekend and it is now extremely close in the Championship standings and we have a long way to go. We had a few issues with tyres and grip in the race and he salvaged two good results considering that. Joe is still very young and learning the trade, his crash on Saturday was unfortunate and just a small mistake.
They both showed flashes of brilliance over the weekend and I am confident we can build on all this and push hard in the final half of the year. The team worked very hard all weekend and I am sure the results will follow very soon. Both riders are very strong at Brands so we hope to be back on the top step there.”
2016 Sponsors
CAME – BPT – MONSTER – FLY BY NITE – RACEWAYS MOTORCYCLES – YMUK
By bantermedia|2016-07-25T14:25:37+00:00July 25th, 2016|Uncategorized|Comments Off on CAME BPT Monster Yamaha – British Supersport Thruxton – Round 6